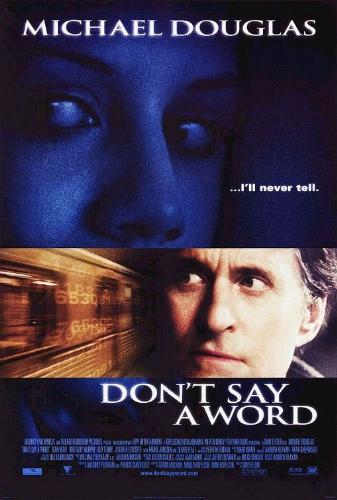 Don't Say a Word is a psychological thriller from 2001, based on a novel by Andrew Klavan and starring Michael Douglas, Sean Bean, Brittany Murphy, Famke Janssen, Jennifer Esposito and Oliver Platt.

Dr. Nathan Conrad (Douglas), a respected child psychiatrist, is called on by his colleague, Dr. Louis Sachs (Platt), to take on as a patient Elisabeth Burrows (Murphy), a deeply disturbed young woman who stabbed someone unprovoked. Elisabeth doesn't say much except to guess that Dr. Conrad wants "what they want". On Thanksgiving morning, the morning after he sees Elisabeth for the first time, Dr. Conrad's daughter Jessie is kidnapped. Patrick (Bean), the leader of the kidnappers, calls Dr. Conrad and tells him Jessie will die unless he gets Elisabeth to give him a six-digit number that will lead to a stolen diamond.