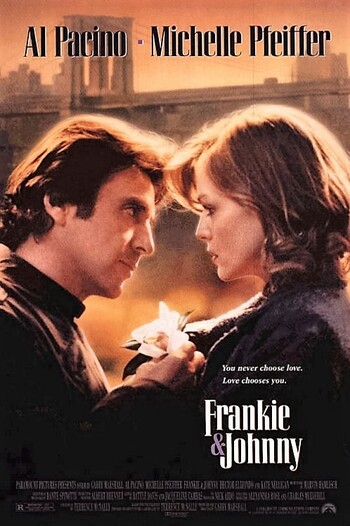 Frankie & Johnny is a 1991 American romantic comedy film directed by Garry Marshall. It stars Al Pacino and Michelle Pfeiffer — in their second collaboration after Scarface (1983) — with Nathan Lane, Héctor Elizondo and Kate Nelligan appearing in supporting roles. It is a film adaptation of Terrence McNally's two-person play Frankie and Johnny in the Clair de Lune. The play in turn gets its name from the old American Murder Ballad "Frankie and Johnny", about a woman named Frankie who shoots and kills her lover, Johnny, after finding him with another woman.

Frankie (Pfeiffer), a young woman with a Dark and Troubled Past waitressing at a New York City diner has sworn off relationships. Her only friends seem to be her neighbor, Tim (Lane) and her coworkers at the Apollo Cafe. This changes when recently released ex-convict Johnny (Pacino) gets a job as a short-order cook there. Johnny falls in love with her, but how can he convince her to learn to trust again?

Not to be confused with the 1966 film of the same name starring Elvis Presley, or the 1936 film co-starring Lilyan Tashman, or the 1928 play that the latter was based on.

Advertisement:
Tim: [after repeated phone calls from Johnny] Excuse me, Johnny, I've got to hang up. We're expecting a call from you any minute.
Johnny: [waiting for Frankie] I have a cousin who's gay, by the way.
Tim: Oh, most people do.
Frankie: Ready!
Johnny: He's a really great guy.
Tim: I'm sure.
Johnny: He just found out he was gay a couple of months ago.
Tim: Well, I'll look him up in the directory. Under the new entries.
Johnny: Now, there's a man and a woman. He's a cook. She's a waitress. Now, they meet and they don't connect. Only, she noticed him. He could feel it. And he noticed her. And they both knew it was going to happen. They made love, and for maybe one whole night, they forgot the 10 million things that make people think, I don't love this person, I don't like this person, I don't know this- Instead, it was perfect, and they were perfect. And that's all there was to know about. Only now, she's beginning to forget all that, and pretty soon he's going to forget it too.