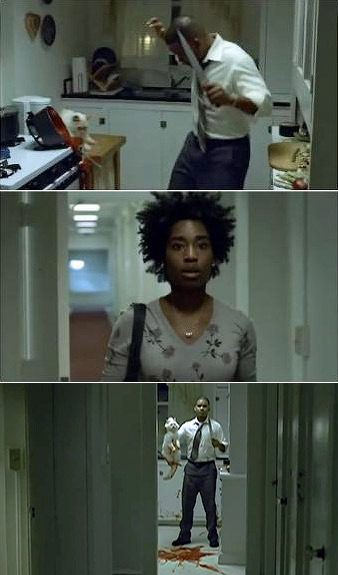 "It's not what you think! I know it looks like we're cleaning dishes, but actually we're having sex."
— Gregory House, House

A common trope in romantic comedies is the humorous misunderstanding, or the Not What It Looks Like.

A couple teetering between Will They or Won't They? has gradually started to slide toward "they will". But wait! The girl sees the guy's old crush/ex-girlfriend/other person who's previously expressed a romantic interest in him (or vice versa) go into his apartment/a hotel room/etc., and stay for a suspicious length of time.

The girl is convinced that he and the other woman have gotten together, and goes through intense doubt about her own relationship with the guy. However, she'll hardly ever confront him about it, instead preferring to stew in her own insecurity or make veiled mean comments to the guy, who's usually completely clueless as to what's going on because the other woman just wanted something completely banal, like someone to vent to after her latest boyfriend dumped her. The scales even out, the status quo (i.e., Unresolved Sexual Tension) is restored, and the fans tear their hair out and scream at the writers for some progress, dammit! note  Or laugh, because sometimes it's funny.

Often the other woman will catch on to what's happened after a while and tell the girl what really went on, clearing the way for a slide toward "they will" again. In most of these situations, the other woman is a relative, "proving" to the girl that nothing untoward was happening.

This can also apply to non-romantic situations, such as one person thinking another person has committed (or is planning to commit) some heinous act, or misinterpreting a harmless situation into something scandalous. Mistaken murderers involving accidents with sharp utensils and bottles of tomato sauce are surprisingly common.

The name of the trope comes from what is usually the first line the guy says afterward, often followed by, "I Can Explain!" This line is also the first line uttered by an Accidental Pervert.

Can provide the grounds for a Second-Act Breakup or Third-Act Misunderstanding. See Innocent Innuendo for a more sexual-related variant of this trope, and Abuse Mistake for a more violent variant. If the whole thing could be cleared up by one simple statement that nobody ever thinks to say, it's probably an Idiot Plot. Compare That Came Out Wrong.

During the fight against Mariah, Joseph and Avdol get stuck together by Mariah's stand, Bastet. Unfortunatly for them, bystanders come by at the worst possible moment

During the fight against Mariah, Joseph and Avdol get stuck together by Mariah's stand, Bastet. Unfortunatly for them, bystanders come by at the worst possible moment