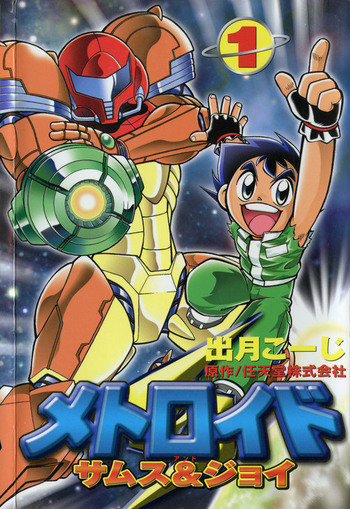 Cover of the first volume.
"Fear is not something to be ashamed of. Even I get scared in battle- don't be shocked, Joey, it's true. But if you let your fear control you, if you just turn your back and run, then you will lose what's most important to you. In that regret lies shame. To ensure I don't lose anyone else, I fight, even when I'm afraid."
— Samus Aran, Chapter 8
Advertisement:

Metroid: Samus and Joey is a manga spinoff of the Metroid videogame series from artist Kouji Izuki (also known for Raiseman Zero and various Mega Man tie-ins) which ran in Bom Bom Comics for 17 chapters from 2002-2004, followed by another 12 chapters under the title Metroid EX: Samus and Joeynote For "EXtreme" before ending in 2005.

Samus Aran is the galaxy's greatest bounty hunter, a mysterious figure in Powered Armor who appears from nowhere to slay mountain-sized beasts and topple planetary criminal empires, then vanishes without saying a word. Beyond the fact that Samus has accomplished dozens of impossible missions single-handed, almost nothing about them is known, leading even some professional soldiers to think "The Hunter" is just an urban legend.

After saving a boy named Joey, whose backwater colony was under attack by Space Pirates, Samus finds a young wannabe warrior begging to become her disciple. At first Samus has no interest in "babysitting" a naive kid, but she soon realises that his determination is genuine, and decides she can at least give him a ride to the nearest spaceport...

Samus and Joey is notable for depicting Samus from the perspective of a supporting character (Joey) rather than Samus herself, allowing for what is possibly the single most badass incarnation of the character in any official media. Joey himself manages to escape the normal hazards of a Kid Sidekick by developing potent Barrier Warrior powers, which are distinct enough from Samus's own abilities that he is consistently useful without stealing Samus's thunder.

The first part of the manga was compiled into three volumes (now out of print), with the first including a bonus retelling of the start of Metroid Fusion titled Rebirth of Samus. The EX arc, however, has never been republished. A complete Fan Translation has been created by Metroid Database, and while the website has dropped the comic after being remodelled, it can still be found on the original site

Samus and Joey provides examples of: