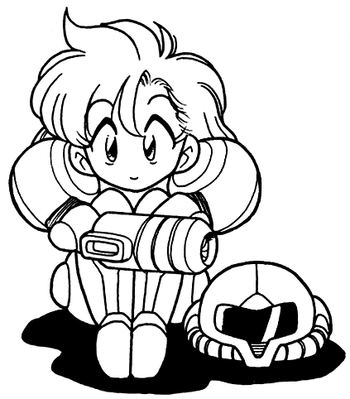 In August 1994, Japanese manga digest Shounen Oh! Game Comic published a series of short 4-panel comics based upon Super Metroid. Unlike the dark and serious tone of the Metroid series, these non-canonical comics do not take themselves seriously at all, leading to a very comedic take on Samus Aran's personality as she goes on her mission to save the baby Metroid... all the while being distracted by round objects.
Advertisement:

There are three parts. "Round and Round" by Matsumoto Hidetaka focuses largely on Samus's obsession with round objects. "Oh! Metroid" by Hikka Ichiro shows Samus with a Hair-Trigger Temper. "Find the Baby!!" by Kan Sonsa features various gags related to Samus's equipment and abilities.

Compare with the English comic adaptation of Super Metroid published in Nintendo Power, or the canonical (and much more serious) prequel manga.

The manga can be viewed here

, with an unofficial fan translation here