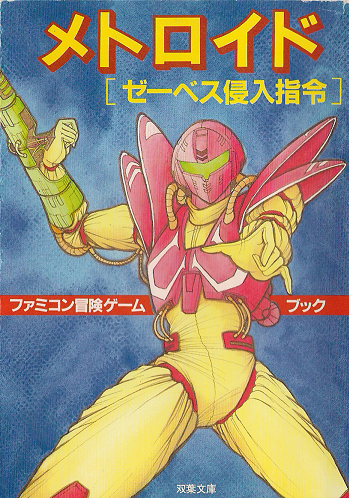 Metroid: Zebes Shin'nyuu Shirei, unofficially translated by fans as Metroid: Zebes Invasion Order or Metroid: Zebes Incursion Directive, is a Gamebook released in December 1986 by Futabasha, based on the first game of the Metroid series.
Advertisement:

After the establishment of the Galactic Federation, a band of criminals known as the Space Pirates (inspired by the stories of the The Golden Age of Piracy) have forced the Federation Police to hire Space Hunters to take them down. When the united forces of the Space Pirates have stolen a bio-capsule containing cell cultures of the mysterious and dangerous life-form Metroid, they have brought it to their secure asteroid fortress Zebes with the intent of using the Metroids as bioweapons. With the Federation Police unable to attack Zebes, they have commissioned Samus Aran, the strongest Space Hunter of them all, to infiltrate the fortress and retrieve the Metroid capsule.

While that sounds pretty similar to the plot of Metroid, this gamebook provides some hefty Adaptation Expansion in the form of a lengthy playable epilogue, which reveals what happens immediately after Samus retrieves the Metroid capsule and destroys the Zebes fortress. Interestingly, several of the plot points in this epilogue would be revisited in later canonical Metroid games, including the remake Metroid: Zero Mission, which has a similar epilogue of its own.

While the gamebook was never officially released outside of Japan, a complete fan translation can be found hosted on Metroid Database. This uses Twine as a game engine, and is therefore titled Twinetroid

. A few liberties were taken in order to adapt the book to an online format.

This gamebook contains examples of: