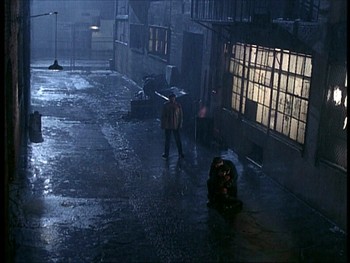 Angel rescues a gangbanger from the demons who have killed the other members of his gang. He attempts to 'persuade' the obstinate gangbanger, a key witness whom Angel has tracked down to testify in court against a shady Wolfram & Hart client, to do his civic duty.

Elsewhere, Faith, last seen in "Who Are You," arrives in Los Angeles on a bus. She mugs the first man she meets.

In a flashback to to Borşa, Romania, in 1898, Darla leads Angelus into a home. After removing Angelus's blindfold, Darla wishes him a happy birthday and lets him vamp out on a bound and gagged Romani girl.

Outside Angel's office, Cordy and Wesley argue over whether or not Marquez is going to do it. Cordy believes that her vision that helped save Marquez life was a waste of a vision. Wesley believes Marquez will testify.

In court the next day, Lindsey McDonald, on behalf of Wolfram & Hart, moves for dismissal of a murder charge as there are no witnesses, but Angel shows up in the nick of time with Marquez, who is a key witness for the prosecution and is now willing to testify. As Lindsey takes heat for his failure in court, Lee Mercer presents Lindsey with some papers, claiming a solution to their problem. Together with Lilah Morgan, who knows how to find Faith, he makes the contact.

The next night in 1898, Darla returns to find that her darling boy, Angelus, is no longer the demon she created. Angel reveals that the Romani girl he ate on his birthday had a family, who found out about her death and did something to him. Darla is disgusted, breaks a chair, and tries to stake Angel. After she fails to kill Angel, Darla kicks him out of the home.

In Wolfram & Hart, Lilah, Lindsey, and Mercer are explaining that it would be in their best interest if Faith killed a man named Angel, but they don't want to be connected to his death. In return, Wolfram & Hart can get Faith off of her murder charges. She asks what they will pay. When Lee fails to answer right away, she grabs him by the scruff of the neck and beats his face into a table. His co-workers beam at their new trainee's can-do initiative.

The next day, Cordelia, Wesley and Angel are in the lobby of an office building on their way to a luncheon meeting. Faith attempts to shoot Angel in the back with a crossbow, but Angel turns around in time to catches the bolt in mid-air a few inches from his heart. Faith issues her challenge and runs for the door. Cordy notes Faith looks fit as a fiddle for somebody in a coma.

Back at his office, Angel phones Giles in Sunnydale to learn that Faith got loose a week ago. Angel pulls rank and instructs Wesley and Cordelia to make themselves scarce. Cordelia wholeheartedly agrees, but Wesley balks at having to run and hide. He tries to convince Angel that there may still be a chance that Faith could be helped, but Angel interrupts by reminding Wesley that he had ruined Angel's one chance at rehabilitating Faith the year before. Wesley looks abashed.

Later, Angel finds Faith in his outer office, where she stands protected from immediate attack by sunlight streaming through the raised blinds. She tosses Angel a gun, which he immediately aims at her leg and shoots. The bullet is a blank, however, and he tosses the gun back. After mocking him for only trying to wound her, Faith says she wants to "up the stakes" by playing for Angel's soul as well as his life. She shoots him in the shoulder with a real bullet, then escapes by crashing through the sunny window.

Angel, wearing a suit and spouting corporate double-speak, sneaks into Lindsey's Wolfram & Hart office. Lindsey interrupts Angel in mid-snoop. He denies knowing anything about Faith. He also informs Angel that Wolfram & Hart has advanced security systems both electronic and mystical—Angel's every move has been documented in digital hi-def since he crossed the building's threshold. After disabling the first security guard on scene, and with a parting promise to Lindsey, Angel chooses discretion and leaves.

In the meantime, Cordelia tries to get into her apartment, but her ghost Phantom Dennis makes it difficult. Cordelia thinks Dennis is jealous of Wesley until they discover that Faith has broken in. Faith knocks Cordelia and Wesley out, and takes Wesley back to her apartment, where she ties him to a chair and tortures him. Faith has correctly calculated that Angel, indifferent to being targeted himself, will be unable to ignore threats to his friends. Finding Wesley still defiant, Faith recites the list of the "five basic torture groups," blunt, sharp, hot, cold, and loud, and decides to move from blunt to sharp. Meanwhile, Angel and Cordelia feverishly work to locate Faith before she kills her bait.

In 1898, a shabby Angel begs for food on the streets of Borşa. He encounters a group of well-dressed people but rejects the coin they toss into the mud, telling the men that he wants the lady in their company. The men rush Angel and force him into a dark alley as he shouts, "I'm a monster!" Soon the men come sailing back out to the street, followed by Angel, staggering but still upright. He grabs the shrieking woman, drags her deeper into the alley, backs her up against the wall and bites her, then mutters, "I can't, oh God, I can't." As he stumbles away down the muddy street, the girl he wanted to eat staggers out after him, bitten but alive.

Faith sits disconsolately in an open window, waiting for Angel. Sighing, she drops the now-bloody glass shard on the pavement below. Turning back into the room, she continues to torment her former Watcher. Apparently ready to switch to "hot," she goes to the kitchen for a flame wand and a can of non-stick spray. Before she can have her fun, Angel smashes down the door and charges into the apartment. Wesley throws his chair back, and Angel kicks Faith away from Wesley. They continue to batter the furnishings and each other, then crash out a window together, only to resume combat in the alley three stories below. Rain begins to pour down and it becomes increasingly clear that Angel has no intention of killing Faith. Meanwhile, Wesley cuts himself loose and staggers downstairs, armed with a kitchen carving knife. Faith, more and more distraught, tries wildly to force Angel to fight back. Faith breaks down completely, confessing her self-loathing and begging Angel to punish her.

Angel finally takes Faith in his arms and goes to his knees with her, holding her close as she collapses in the dark downpour. Behind them, Wesley drops his knife.