Faith: I am not a killer! I am the Slayer! And you don't know the first thing about me.
Forrest: You really care what I think?
Faith: No. I don't care. God, I don't care. 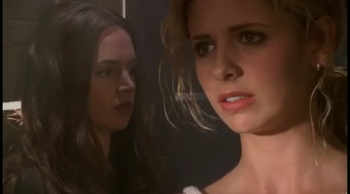 Faith (in Buffy's body) stands by Joyce while Buffy (in Faith's body) is taken away in an ambulance. They discuss Faith and Joyce notes how horribly unhappy Faith must be. After their conversation, Joyce hugs Faith who is visibly uncomfortable by the sudden affection. Afterwards, Faith takes a bath. She tries to get used to her new body and practices saying phrases she thinks Buffy would say. Faith then crimps her hair, puts on sultry make up and wears leather clothes. Soon after, she buys a plane ticket with Joyce's credit card and goes out to meet the Scoobies.Meanwhile, Willow and Tara talk about Faith and Tara confesses that she 'belongs' to Willow.

An armored truck runs into the police car holding Buffy and leather-clad operatives from the Watcher's Council jump out. They capture Buffy and put her in the back of their truck.Faith attends a meeting at Giles' apartment alongside Willow, Xander and Anya (who makes Faith uneasy as she has no idea who she is). Faith happily tells the gang that Faith is on the way to prison but Giles tells them its unlikely as the Watcher's Council has sent a team to apprehend the rogue slayer and take her back to England. Faith is ecstatic at the news and goes out to celebrate at the Bronze until she runs into Spike. Once she realizes who Spike is, Faith begins teasing him and speaking to him seductively. When it's obvious Spike is confused but attracted to her, Faith tells him she wouldn't do anything to him anyway as it's wrong. Frustrated and furious, Spike promises that as soon as his chip is out, they'll have a confrontation. Faith merely smirks at Spike's threat and leaves.

Elsewhere a vampire pack led by Boone, return to their nest and find Adam waiting there for them. Adam talks to them and discusses their fears. He calls vampires a paradox as they are immortal but fear death more than mortals do.

Buffy finds herself chained to the back of the truck with the Council team. She tries to convince them that her body has been switched with the other Slayer but they're unfazed.At the Bronze, Willow introduces Tara to Faith. While Willow gets some drinks, Faith reads between the lines, quite amused to realize that Tara is gay and carrying a torch for Willow, and needles Tara by talking about Oz. Willow returns and points out a vampire with a girl which Faith reluctantly goes out to slay. The girl thanks Faith for saving her which surprises and upsets Faith.

One of the Council members enters the truck where Buffy is being held and she attacks him, threatening to kill him unless they let her go. The other two members tell her that they've settled their affairs and are prepared to die if it means accomplishing their mission. They tell her to do what she wants and unable to go through with her threat, Buffy lets the operative go.At the Bronze, Tara notices the fragmented energy coming from Buffy and knows that 'Buffy' isn't who she says she is. She informs Willow and they prepare to perform a ritual to track Buffy's real energy.

Faith visits Riley and seduces him in the form of Buffy. At first, Faith is overtly sexy and provocative but Riley isn't interested in games and wants to make love rather than just have sex. After they sleep together, Riley tells Faith that he loves her which stirs Faith's real identity again. She attempts to leave quickly in the morning, leaving a sleeping Riley. She encounters Forest who confronts her about her influence over his friend and teammate. Meanwhile, Adam's eloquence has won over Boone's gang and they pledge their allegiance to him. He tells them they will announce his presence and decides to send them to what they fear most.

When the Council team realize they won't be able to get the Slayer to England, they decide they will kill her instead. Buffy however is prepared; she uses one of the operative's guns to break her chains and the lock on the door. She moves to the driver's seat and leaves with the armoured truck.

Faith is at the airport, preparing to leave town by obtaining a boarding pass for the plane. Buffy arrives at Giles' apartment and struggles to convince him of the truth about the body swap. She reminds him of his stint as a demon and his sexual encounter with her mother which sufficiently convinces him of her real identity. Willow and Tara arrive (with Tara being properly introduced to Buffy), having created a katra that will switch Buffy and Faith back the next time they make contact. After turning on the TV, they discover that Boone and his gang are holding hostages at a church. At the airport, Faith sees the same report on TV and decides to go back and face the vampires. Riley arrives wanting to help but Faith reminds him of his injury and asks him to stay outside. Buffy, Giles, Willow and Tara arrive with Giles acting hysterical to distract the police while Buffy slips inside.

Faith challenges the vampires inside, quickly taking them out before facing Boone. As he starts talking about how Adam has shown him the way forward, Buffy takes him from behind. The two Slayers fight with Faith punching Buffy several times whilst screaming emotional abuse (showing her punching what appears to be her own face while screaming these things shows the extent of Faith's self-loathing). Buffy grabs Faith's hand and the two swap back to their own bodies. The real Faith runs off and is gone without a trace.The next day, Buffy and Riley are talking and Buffy realizes that Riley had sex with Faith whilst in Buffy's body. The revelation deeply troubles them both. Meanwhile, Faith leaves town on a cargo train.