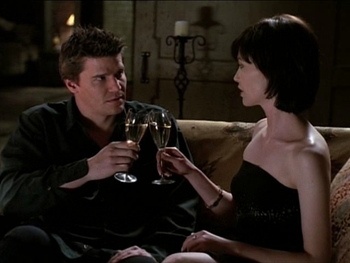 Angel and Wesley are attending a rehearsal for a play in which Cordelia Chase has a part. They want to escape, but see no way to do it. Afterward, the three of them are walking together when Cordelia spots Oliver Simon, a well-known talent manager, and a famous actress, Rebecca Lowell. When Rebecca crosses the street, a parked car pulls into traffic and accelerates toward her, as if the driver intends to murder her. Angel pushes her out of the car's path, saving her life. Oliver offers Angel a reward, but he refuses to accept it. Cordelia gives Rebecca a business card for Angel Investigations.

The next day, the papers report on the rescue, but Angel is not mentioned in the story. Rebecca and two boydguards come to Angel Investigations, asking for Angel's help with a stalker fan. Angel declines to take the case. This infuriates Cordelia, who sees it as a chance for her to network with Hollywood people. Wesley explains that Angel cannot take the case because he likes Rebecca and is afraid of getting close. Angel remains silent. When Wesley says he agrees with Angel's decision not to take the case, Cordelia pretends to have a vision about Rebecca being in danger, but Wesley and Angel are not fooled.

At her house, Rebecca's esthetician is waxing her face, while the two discuss plastic surgery, which Rebecca is considering. That night, she hosts a party, and after her guests leave, a masked man breaks in. Angel, who has evidently been watching the house, breaks through a sliding glass door to protect Rebecca. The masked man escapes. Rebecca notices that Angel has no reflection, and in the heat of the moment, Angel disappears. Rebecca's bodyguards arrive soon after, saying that they have called the police. After the police leave the house, Rebecca calls out Angel, knowing he hasn't actually left. She knows he is a vampire, but is not frightened. She asks Angel to stay in the house for the night.

The next morning, Angel phones Wesley to say he is taking Rebecca's case. Cordelia is worried that Angel might have sex with Rebecca, revoking his soul and turning him back into Angelus. She goes to Rebecca's house with three lattes and a large wooden cross, and Angel, who answers the door, tells her that Rebecca knows he is a vampire.

Rebecca has lunch with Oliver, who tells her that she did not get a part she was hoping for. Oliver says the producers want to hear her read.

Back at her house, Rebecca tells Angel that she is not used to reading for parts. Her career is in decline, after more than a year off the air.

That night, Rebecca attends a premiere, with Angel as her bodyguard. After making their appearance on the red carpet, Rebecca leads Angel out the back door, as she never watches the movie. As they walk down the alley behind the theatre, an attacker in evening dress shoots at them, but Angel is able to fight him off. Rebecca recognizes the attacker as a stunt man whom Oliver once represented. When Oliver appears at the scene, he confesses that he arranged the attacks on Rebecca to get publicity for her. Rebecca guesses that she did not get the part she was hoping for, and Oliver explains that she is now too "mature" for some roles. When he mentions that no one can stay young forever, Rebecca glances at Angel.

Back at Angel Investigations, Wesley and Angel discuss how the shooter was using blanks, and conclude that it was a hoax. Angel is worried that Rebecca will be hurt if she learns that no one cares about her enough to stalk her.

Rebecca invites an excited Cordelia to go shopping with her. As the two walk the streets of LA, Rebecca pumps Cordelia for information on Angel.

Rebecca comes to Angel Investigations uninvited. Finding Angel in his basement apartment, she offers him a bottle of champagne as a gift. She spills some of her wine on Angel, who leaves to change his shirt. Meanwhile, she pours a powder into his drink. When he returns, she offers a toast and the two drink, Angel none the wiser.

Cordelia pages Wesley to her apartment. When he arrives, she tells him that Rebecca was curious about Angel and confesses that she told Rebecca much about him, including intimate details on how one becomes a vampire. Cordelia has guessed that Rebecca wants to be a vampire herself in order to be young forever.

At Angel's apartment, Angel is more relaxed and it seems the drug is taking effect. In a seductive manner, Rebecca suggests that Angel make her a vampire. Angel refuses, saying she doesn't know what she is doing. In sudden rage, he takes blood from his refrigerator and sprays some of it into her mouth so she will have a taste of what she is asking for. Surprised at his own feelings and actions, Angel guesses that she drugged him. She admits it, saying she wanted to lower his defenses a little by slipping him a 'happy pill'. However, the pill has caused Angel to feel perfect bliss, reverting him into Angelus, who bites her shoulder and takes on his demon face. She strikes him with a candle stick, then escapes into the elevator.

Rebecca's elevator stops between floors, so she attempts to escape from the bottom of the elevator into Angel's office, where she finds Wesley and Cordelia. She admits that she gave Angel a drug called Doximall, a powerful tranquilizer that induces bliss. Wesley is "reasonably sure" that the effects will wear off, as the happiness was only synthetic, and hopes the good Angel will return once the drug wears off. The lights go out as Angelus cuts the power, and he enters the office, where he mocks Wesley for his inferiority complex and Cordelia for her bad acting. She threatens him with a bottle of water, which she claims is holy water. Angelus says she is bluffing, but Cordelia insists she knew there was a chance Angelus could return. When Cordelia splashes it on him, he recoils, only to discover it is just normal water. However, Wesley takes advantage of the momentary confusion and pushes Angelus down the elevator shaft, rendering the vampire unconscious.

When Angel wakes up, he is chained to his bed. After confirming that Rebecca is gone and, unsurprisingly, will no longer be using his services, he apologizes to Cordelia and Wesley for what he said. Wesley accepts, telling Angel he understands what a fine line he walks. Cordelia is still angry, though not for what he said as Angelus, but for the fact he didn't tell her the truth about her acting. She notes that at least when he doesn't have a soul he's honest. However, she eventually agrees to put the incident behind her, though still leaves Angel chained to the bed for the time being.