"Vengeance is what I do. I don't need anything else."
—Anya Jenkins 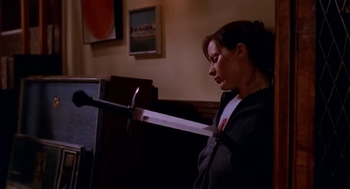 Dawn helps Willow move into her new room at Summers house while giving her advice on how to fit in with the people at school. Buffy and Xander contribute to the effort too as they talk about Anya. Buffy wonders about Anya's evil intentions, but Xander thinks she's getting better and is no longer a threat. Meanwhile, at a fraternity house, male bodies litter the floor; all have their hearts ripped out. Anya sits in the corner, covered in blood and rocking back and forth, seemingly shocked by what she's just done.

Flashback to Sjornjost, Sweden. It's 880AD. A pre-demon Anya, originally named Aud, cares for her Viking mate Olaf. He has returned from a hard day of fighting trolls, although Aud doubts him. She waits on him, promising the requested sex after he's eaten and rhapsodising about the 'sense of accomplishment that stems from selflessly giving yourself to others'. She worries that Olaf has been unfaithful.

In the present day, Spike talks to Buffy about his mental struggles and remembers Drusilla. Buffy is warm and reassuring but it's shown that it's not the real Buffy. The delusion disappears when Buffy actually enters the room. She tells Spike he needs to get out of the school basement and away from whatever is making him so crazy down there.

On the college campus, Willow talks to an old professor about rejoining his class and sees Anya leaving a fraternity house. She's dressed in a trench coat and seems wary, saying that she's dating one of the fraternity boys when Willow asks. Willow spots a streak of blood on Anya's wrist as she quickly leaves. She goes into the fraternity house to investigate and finds the room of corpses. There's a young student whimpering in a closet that she 'takes it back'. She tearfully explains to Willow that she made a rhetorical wish about having their hearts ripped out after the boys played a cruel trick on her. A giant spider demon appeared and did just that. The spider is still around and attacks Willow and the girl. Willow uses magic to keep it bay, making a nasty comment to the girl (reminiscent of Dark Willow) before tossing the spider through the window. She comforts the girl, seemingly back to her normal self again.

In another flashback to Sweden, Aud watches Olaf as he's magicked into a troll after he cheated on her. He's running away from a mob trying to kill him. D'Hoffryn watches her and praises her magical skill and vengeful resolution. D'Hoffryn insists that Aud's true self is Anyanka, a natural born vengeance demon and offers to make her one in reality. She accepts.

At work, Buffy receives a call from Willow about the fraternity house and the spider demon. Meanwhile, Halfrek is in Anya's room praising her return to enthusiastic vengeance while Anya seems regretful. Willow barges in and orders Halfrek out. Anya rejects Willow's assistance and considers Willow poorly qualified to judge considering her brush with darkness. Buffy and Xander search the woods for the spider demon and are surprised by it as they inspect another one of its victims. It nearly kills Buffy before she takes it out with an axe. Buffy and Xander return to the Summers house and find Willow, waiting with an explanation about where the demon originated and the damage it's caused. Xander shouts at Willow but realises she's delayed telling them as it means Buffy will have to kill Anya.

In a flashback to 1905, Anyanka and Halfrek drink champagne at a banquet full of massacred men in Russia. The city of St. Petersburg burns outside the window. Anyanka accepts Halfrek's compliments for starting the Russian Revolutionnote No, the other one. The one of - you guessed it - 1905 but rejects her offer to celebrate as her work is all she is and all she wants.

Back at the Summers home, Xander denounces Buffy's plan to kill Anya but she remarks that his lingering feelings for Anya are clouding his judgement. He insists Buffy always protects demons she loves and she reminds him that she killed Angel even though she loved him more than anything because it was the right thing to do. Her judgements as the Slayer are absolute. Xander insists there must be another way and rushes off when Buffy tells him to try finding one. She takes weapons and goes to find Anya alone, Willow pleading that she can't bear to accompany or help her.

Left alone, Willow runs to her room and uses the summoning talisman that D'Hoffryn gave her three years earlier. D'Hoffryn is pleased that Willow called him as he was impressed by her flaying of Warren Mears and her surrender to hatred as Dark Willow. He assumes Willow has called to accept the role of vengeance demon but she insists she's called him to discuss Anya's recent actions. He agrees to talk.

Xander finds Anya at the frat house. Anya rejects his help, claiming he breached his promise of marriage, a point that Xander thinks is no longer an excuse. Buffy arrives and Anya changes to her game face, throwing Xander aside and attacking Buffy. They seem matched until Buffy shoves a sword through Anya's chest. In a sudden flashback to the musical episode, we see events that would have happened during Sweet's enchantment of Sunnydale. Anya sings her solo number about being Xander's 'Mrs' and the centrality of the role in defining who she is now. Anya comes to and is immune to her injury. She pulls the sword out. Buffy fights the sword away and gets another shot to use it before Xander tackles her away from Anya.Suddenly, D'Hoffryn appears interrupting the battle. He first approves the carnage caused in the house by Anya and reminds Buffy that attacking him would do nothing. D'Hoffryn compliments Xander's gallantry and asks Anya what she wants to do. Anya asks to undo her last act of vengeance which is possible as her victims died of 'mystical deaths'. D'Hoffryn warns that he can do it but will the sacrifice. The life of a vengeance demon. Anya is willing to die to undo her actions despite Xander's passionate pleas. D'Hoffryn makes Anya confirm she's willing to pay the price due, then casts a spell which summons Halfrek. Anya realises what's about to happen as D'Hoffryn kills Halfrek, painfully by burning her from the inside out. Anya is devastated at seeing her friend die and feels guilty at her being the cause of her death. D'Hoffryn reminds her of who she's dealing with before turning Anya human again. Anya claims that she should have been the one to die to which D'Hoffryn says there is plenty of time. He teleports away as the frat boys begin waking up.

Hurt and scared, Anya leaves alone but Xander follows. She claims that she's dreading facing her life without a role to lose herself in like vengeance demon or girlfriend or even a shopkeeper. Xander argues with her and tries to comfort her but backs off regretfully. Anya walks away in the opposite direction to face her life on her own, like she wants.