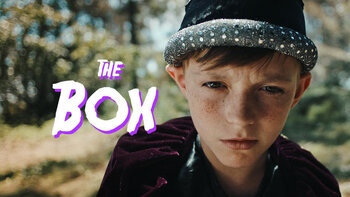 The Box is a Short Horror Film by Jessica Curtright, made for Hulu's Huluween Film Festival.

A young boy (Travis Burnett) is out in the woods one day playing wizard. While he's out there, he comes across a box just left out in the open. Curious, he takes it home to see what's what with it. This proves to be a mistake.

The Box contains examples of: