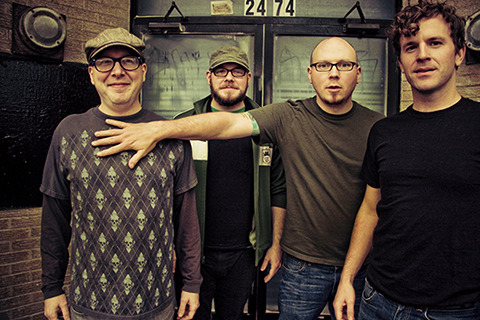 The Smoking Popes' present-day lineup (from left to right): Matt Caterer (bass), Eli Caterer (guitar), Josh Caterer (vocals/guitar), and Neil Hennessy (drums)
But Megan, I
Had a feeling that you would be on that train
So I just waited there for you

The Smoking Popes are a Chicago-based pop-punk outfit from Lake In The Hills, Illinois whose core consists of the three brothers Caterer. In their life as a band so far, they have had five different drummers, though only three have drummed on LPs. They released three EPs (Inoculator, Break Up, and 2) before releasing their debut LP, Get Fired, in 1993. This album gained them the respect of bands such as Screeching Weasel and Green Day, and with these sudden connections, the band was signed to Capitol Records. The label released their sophomore effort, Born To Quit, in 1995 to limited commercial success, as the album reached #37 on the Billboard Heatseekers Chart. This success was partly based on the power of the album's lead single "Need You Around", which was included in the soundtrack for the movie Clueless. They are well-known for Josh's Morrissey-esque vocals, which adds a unique mixture to the band's sound.

Their next release, Destination Failure (1997), strained the band's relationship with Capitol when the label couldn't find a lead single to appease the new crowd they'd gained in the underground pop-punk scene. Within the Smoking Popes, Josh Caterer found the band's music to be incongruent with his newfound Christian beliefs. This combination forced Josh to publicly announce the band's breakup in early 1999. The band, still needing to deliver on their three-album contract, released the covers album The Party's Over, which Capitol rejected.

After seven years of side projects, the Caterers united with new drummer Rob Kellenberger (who replaced their long-time partner Mike Felumlee) to play a reunion show at the famous Chicago venue The Metro. This performance was released as a CD/DVD bundle. After a year of touring with fellow pop-punk band Bayside, Smoking Popes released their first album of original material since 1997 with Stay Down (2008). The band toured extensively over the next year and a half, re-entering the studio in 2010 to begin work on their first concept album. These recordings comprised their release This Is Only A Test (2011).