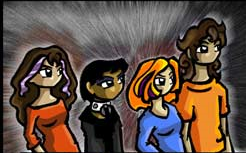 From left to right: Ikku, Nicodemus, Kelsi, and Naim.
Advertisement:

: Deviating From Normality Wombat Style, is a webcomic written by Betsy and drawn by Jena. It is a high school fantasy adventure comic, following four new friends: new girl Kelsi, resident drama queen Ikku, social outcast Nicodemus, and quiet guy Naim. As they try to discover the mystery behind the grey goo invading their school and changing the personalities of their classmates. Along the way, old flames are rediscovered, mysterious pasts are delved into, and somehow fairies get involved.

"Temporarily on hiatus" since... well, the site says 2014, but it feels like it has been longer.