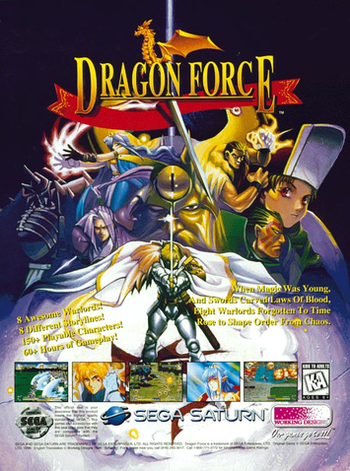 A Real-Time Strategy game by Sega for the Sega Saturn involving war among eight nations of the continent of Legendra. It was localized into English by Working Designs.

Gameplay is split between administrative mode and campaign mode. Each nation starts with five generals, including the monarch. During campaign mode, generals and their troops are organized among castles and sent to capture enemy castles.

Combat plays out on a side-scrolling map with free-roaming camera, one army against one army until all generals are defeated on a side. Troops can be given preset attack patterns and generals can use magic skills to affect either army.

Defeating enemy monarchs causes them to either join as subservient generals or escape to fight another day. Once all nations are defeated, the eight monarchs learn they are the Dragon Force destined to fight the Dark God Madruk. Variations occur through each nation's path, adding replay value.

A sequel, Dragon Force 2, was made and released for the Saturn as well, but was never localized outside Japan. A Sega Ages remake of the first game was released in 2005 for the PlayStation 2.

Not to be confused with the band. Fun fact, this game was the inspiration for their name.