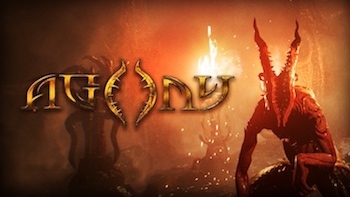 Agony is a 2018 First-Person Survival Horror game by Madmind Studio and published by PlayWay. Players begin their journey as a tormented soul within the depths of Hell without any memories about their past. Possessing the special ability to control people on their path, and even possess simple minded demons, the player must venture through the horrifying realm, meet with the Red Goddess and escape their torment.

In response to backlash over the game's graphic content being toned down, Madmind Studio announced that an uncut version of Agony would be released as a separate game, but this was quickly cancelled due "technical and legal reasons". On October 20th, however, Agony Unrated was shown to be ready for launch and was released on Halloween that year.

Tropes that apply to Agony: