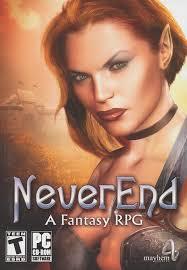 Neverend is a Role-Playing Game with some Adventure Game elements from Slovakian company Mayhem Studios, released in 2006. Despite being played on the PC, Neverend has console-style gameplay similar to the Final Fantasy series. A version for the Xbox was planned, but never released.

The heroine, Agavaen, is a kind of fallen fairy called Auren. Because the Auren are despised by human society, Agavaen has resorted to joining a group of bandits. But after a successful night of thievery and drunken carousing, two of the other bandits split with the loot, even taking Agavaen's precious amulet with them. After a confrontation with the Captain who blames her for their betrayal, Agavaen must track down the bandits so she can take her part of the loot, and more importantly, her amulet.