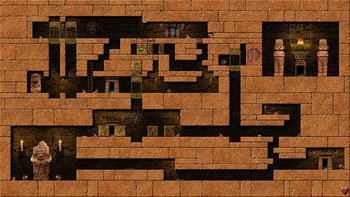 In the middle top, you can (maybe) see your characters. The door on the top right is the exit. This is one of the simpler levels, by the way.
Player Character: Well gentlemen, that's a solid mumbo-jumbo. What should we do with it all?
— Beginning of Quadrax Neverending

Quadrax is a cooperative Puzzle Game series featuring some platforming elements. The main objective is to get every person under your control, which can range from one to three, into the exit and, if they are present, to collect all crystals there. The player has to achieve this by cooperation between the persons and using elements present within the game, such as elevators, tunnels, but most importantly, a wide array of different stone blocks (in czech language, the word for 'stone block' is 'kvádr', pronounced similarly to 'quadr', hence the name of the game).

The origin of the game can be traced back to 1995, when Slovak company Cauldron created the first game in the series, Quadrax. The game featured two adventurers looking up for their colleagues within the temple of the sun. Its main objective was to get them into the exit using stone blocks and various machinery, with hundred levels standing against the player. The game was then inspiration for freeware project by Alfaline, which, after some Development Hell, was released under the title Quadrax III (the second game titled Return to Quadrax was scrapped during said hell). The current line-up includes:

The list of game sites from III onward is available here

along with level editor for X (and Neverending by extension). Please note that due to difficulty of later games, it is better to start by III or IV to preserve your own sanity and your computer.

Please do not post any hints or solutions for given particular level, not even in spoiler tag! Since solving the puzzle is the entire point of the game, what would be the interest of playing it by walkthrough anyway?