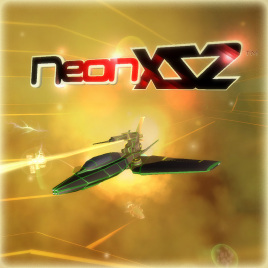 NeonXSZ (pronounced "neon excesses") is a cyberpunk first-person six-degrees-of-freedom shooter beta-launched in 2014 by Intravenous Software, firstly on Desura, then eventually on Steam Early Access. Now released in Febuary 23, 2016 as Version 1.0.

The idea is that the player takes on the role of an "anomaly" inside one of several gigantic cybernetic space stations, where a constant war is being fought between four factions allied on two teams - the OS and Antivirus, and the Malware and Viruses. The player is tasked with piloting their ship through various territories at their own leisure, shoot down ships to gain data fragments, which eventually lead to nice, shiny upgrades for their ship. In the center of the station are a number of gateways to various "challenge arenas", where one can fight off an assortment of hostile ships while navigating their way through the possibly maze-like arena, before turning the arena over to the faction of their choice.

The game can be found on Desura here

, while the Steam version can be found here