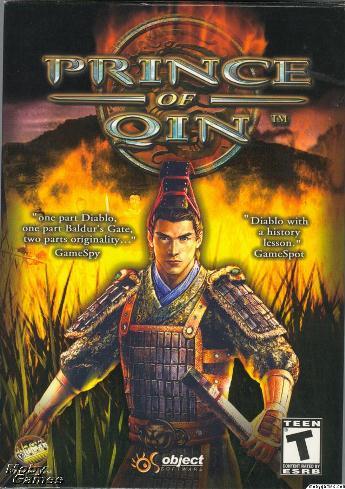 Reviews quoted gave it 67 and 68 points, respectively
Prince of Qin is a 2002 Role-Playing Game, released by the Beijing-based developer Object Studio. It is set during the early Imperial China period, at the time of the fall of the Qin dynasty and the rise of the Han dynasty.
Advertisement:

The player assumes the role of Fusu, the eldest son of Qin Shi Huangdi, the First Emperor of China, who's been exiled to the unfinished Great Wall for refusing to oversee book-burning. Suddenly, he receives an order to commit suicide alongside the commander of the army, General Meng Tian. Suspecting wrongdoing, they refuse to do so, and find out that Emperor has died and his throne been assumed by Huhai, the Emperor's youngest son. Huhai fabricated the order with the country's prime minister Li Si and chief eunuch of the court, Zhao Gao. Their rule has been so tyrannical that rebellion is already underway in all parts of the country, and Fusu is set to play a crucial part.

. Some of the development team had left the studio before the game's release to create Blade & Sword. It also had a short-lived MMO called Prince of Qin Online.