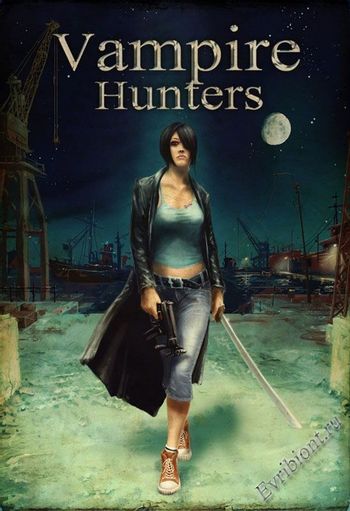 Vampire Hunters is a Point-and-Click Game/Role-Playing Game hybrid, developed by the Slovakian company Mayhem Studios and released in 2009.

The plot revolved around Vampire Hunter Bernard and his quest to avenge his friend and colleague Ivan, murdered by a powerful vampire while in the line of duty. He does so by wandering around a large port, talking to people who may or may not know the answers, bypassing security guards by giving them porn mags and occasionally fighting poorly drawn vampires with magic and swordplay. In spite of being a veteran Vampire Hunter, Bernard is outclassed in nearly fight, but he's still set on avenging every dead human, though the player is unlikely to share that commitment. The game was panned upon release, and the studio was closed soon after.