Video Game / The Age of Decadence 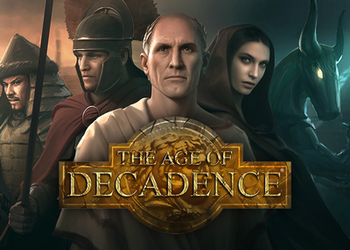 The Age of Decadence is a computer Role-Playing Game, developed by Iron Tower Studio and released on October 14, 2015. Set in a post-apocalyptic Low Fantasy world reminiscent of The Roman Empire, the game aims to follow the philosophy of the golden era, with emphasis on choice and consequences.
Advertisement:

Players have seven backgrounds to choose from, each with their own prologues and preset reputation with the factions. Instead of traditionally leveling up, the player gains skill points upon completing quests and killing enemies. Combat is turn-based, with weapon types having different attributes and the ability to target specific body parts. Unlike other games of the genre, the game does not feature companions, instead focusing on the player character. One can however receive aid from other characters at times, albeit controlled by the AI rather than the player.

A spin-off, Dungeon Rats, was released on November 4, 2016. While still a role-playing game with the same combat system, Dungeon Rats is more akin to Turn-Based Tactics, being party-based and focusing on tactical combat encounters to escape a massive prison mine.

Tropes featured in Age of Decadence include: