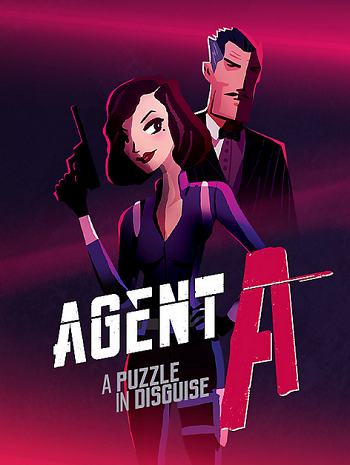 Agent A, also known as Agent A: A Puzzle In Disguise is a Point-and-Click Adventure Game created by Yak & co. Its first episode was released in October 2015, and its fifth and final one in early 2019.
Advertisement:

The protagonist is the titular Agent A, an MIA spy on a mission to find and capture enemy Havok agent Ruby La Rouge. Unfortunately, Ruby is able to trap them inside her hideout, and they must inspect every corner of her secret lair to find a way out.

The game's official site is here

, and the episodic version is available on Google Play

. Complete versions were released on Steam, Nintendo Switch, PS4, and Xbox One in 2019.