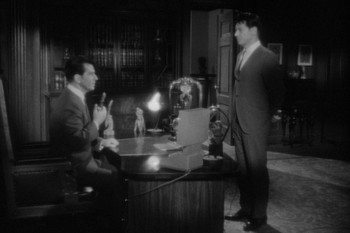 Henderson James and his clone confront each other... 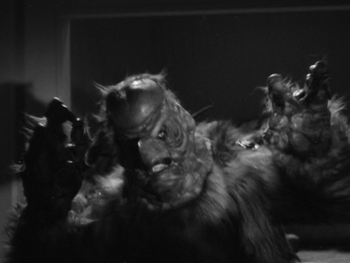 ...but which one will confront the Megasoid?
The Control Voice: Since the first day that Man stared up at the stars and saw other worlds, there has been no more haunting question than this: What will we find there? Will there be other creatures, and will they be like us? Or when that ancient dream comes true, will it turn into a nightmare? Will we find, on some distant, frozen planet, an alien life of unimaginable horror?

In the year 2025, space anthropologist Henderson James (Ron Randell) has himself illegally cloned to kill the Megasoid, a bloodthirsty alien.

The Control Voice: In all the universe, can there be creatures more strange than the species called Man? He creates and destroys; he fumbles and makes mistakes. But the thing which distinguishes him is his ability to learn from his mistakes.