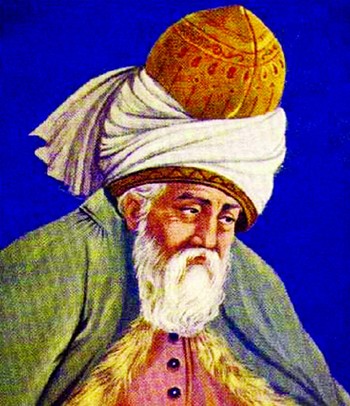 Jalaladdin Mohammad Balkhi (1207-1273), known as Molavi in Persian-speaking countries and Rumi in other places, was a 13th century poet. Being born in either Vakhsh (modern-day Tajikistan) or in Balkh (modern-day Afghanistan) most of his poems are written in Persian. However, his works extend to Medieval Greek, Arabic and Turkish. After his death, his works were collected in three books, Mathnavi Ma'anavi and Divan-e Shams-e Tabrizi, and Fihe ma Fihe, which is prose.
Advertisement:

In America, mostly due to conflicts with Iran, he's famed as a "Sufi Poet". Recent translations of his books mostly contain his more spiritual poems, rather than the ones dealing with his affections to Shi'ia Islam and the Islamic prophet. Centuries after his death, he still enjoys popularity in Iran and a modest fame in Western Countries.