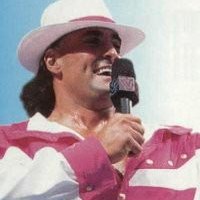 Thomas Brandi (born July 9, 1966) is an American Professional Wrestler from Pennsylvania known for his work for WCW as Johnny Gunn, for WWE as Salvatore Sincere, and for various independents under those names, his own, and as The Patriot, which Del Wilkes claims Brandi stole from him. He debuted in 1985 and has wrestled primarily all over the U.S. for decades. He made his PPV debut at WCW Halloween Havoc 1992 teaming with Shane Douglas and Tom Zenk in a win over Arn Anderson, Bobby Eaton and Michael Hayes.

Among his in-ring achievements, he is a former NWA ECW Tag Team Champion

under his own name with his trainer King Kahlua, a former ICW/IWCCW Television Champion

as Salvatore Sincere and a former 2x MEWF Heavyweight Champion

(1x as Johnny Gunn and 1x as Salvatore Sincere).

Despite being known as Johnny Gunn, he has no connection to Billy Gunn.