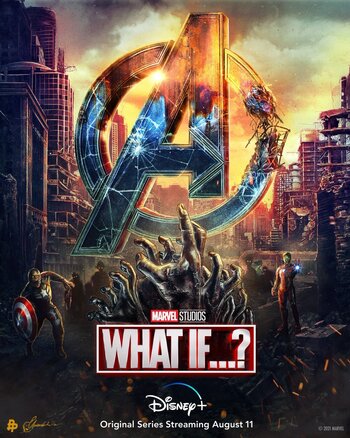 "New York! Home of the Mets, the Chrysler Building, those ladies from Sex and the City, and now, the zombie apocalypse!" note Art

Alternate take on: Avengers: Infinity War and Ant-Man and the Wasp

"Dr. Bruce Banner, the human hiding within the Hulk, fell from the stars to warn humanity of imminent danger. But the world he found was not one he recognized."
— Uatu
Advertisement:

Bruce Banner returns to Earth to warn their heroes of the impending arrival of Thanos… only to find a world where humanity has been decimated by a zombie plague. Even worse, most of the Avengers have already fallen victim to the plague.

"What If... Zombies?!" contains examples of:

"Even in the darkest of times, humans will give all to save their planet. Even if it might bring an end to the universe..."