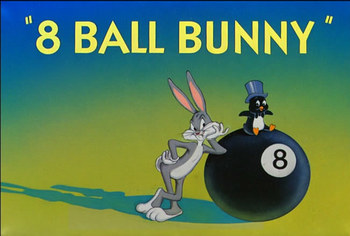 "Pardon me, but could you help out a fellow American who's down on his luck?"
—Humphrey Bogart to Bugs Bunny, repeatedly
Advertisement:

8 Ball Bunny is a 1950 Chuck Jones cartoon starring Bugs Bunny and is the second of two appearances of Playboy the Penguin (the first being Frigid Hare).

The cartoon starts with the Ice Frolics skating show packing up and leaving after a run at the Brooklyn Ice Palace, accidentally leaving behind their star attraction, Playboy the Penguin. He tries to follow the trucks, but slips down a hill and falls into Bugs Bunny's rabbit hole, waking him up. Bugs is annoyed at Playboy disturbing his rest, but he quickly apologizes when he realizes Playboy is lost, and offers to help him find his way home, reading a book and deducing that he has to take him all the way to the South Pole.

And so begins an extended journey as they hop a freight train to New Orleans (fending off a hungry hobo who shows interest in eating one or both of them), where Bugs puts Playboy on what he thinks is a boat to Antarctica but which turns out to be headed for Brooklyn. After Bugs rescues Playboy from being eaten for a second time, they swim to Martinique, where Playboy builds a boat that carries them to the Panama Canal, from which they proceed on foot across South America, dodging cannibal tribes and crocodiles before finally crossing the Southern Ocean to Antarctica. But there's something Playboy hasn't told Bugs about himself...