Series / Once and Again 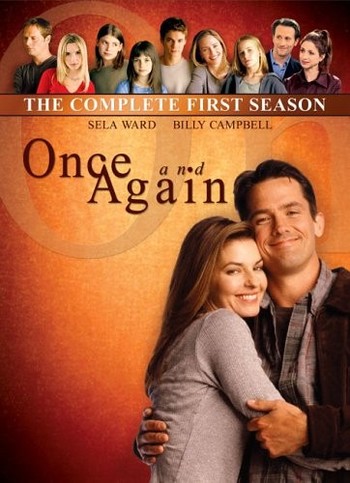 Once and Again was a drama series created by Edward Zwick and Marshall Herskovitz, who also were the driving force behind thirtysomething and My So-Called Life, and it starred Sela Ward, Billy Campbell, and Evan Rachel Wood, among others.

Rick Sammler, a divorced architect, and Lily Manning, a soon-to-be-divorced salesperson, Meet Cute when Lily takes her daughter Grace to see the school doctor during a soccer game while Rick is waiting with his son Eli to see the principal. They soon become romantically involved, but their relationship is complicated not only by their children (they each have two; Rick's son Eli and daughter Jessie, while Lily has two daughters, Grace and Zoe), but also their respective exes (Jake and Karen).

The show ran for three seasons (from 1999-2002) on ABC, and while it didn't earn the acclaim of their previous show My So-Called Life, it was praised for its handling of the teen characters, and was probably the show that first brought Mischa Barton and Evan Rachel Wood to people's attention. The show was also known for having the characters speak their innermost thoughts in black-and-white segments scattered throughout each episode.