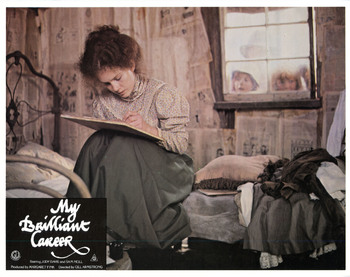 My Brilliant Career is a 1979 film directed by Gillian Armstrong.

Sybylla Melvyn (Judy Davis) is a headstrong young woman growing up in Australia near the end of the 19th century. She has dreams of being a great writer, dreams that do not impress her parents, cattle ranchers in the Australian outback. Her parents, flailing for something to do with a daughter that has no romantic prospects and clearly loathes ranching, send her off to live with her wealthy grandmother. She has various suitors, the best of the bunch being young Harry Beecham (Sam Neill). Harry loves her and eventually asks her to marry him, and Sybylla develops feelings for Harry as well. However, she remains torn between her love for Harry and her desire to be a writer, and the conflict between being a career woman and getting married.

Based on a 1901 semi-autobiographical novel by note Stella Miles Franklin.