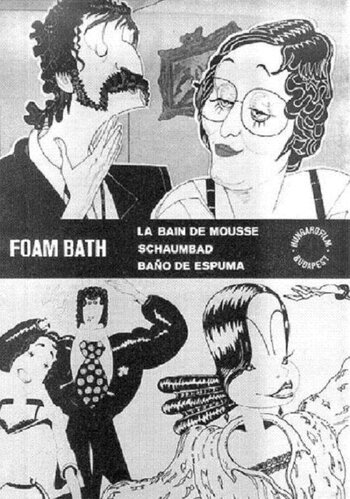 Animated musical to the rhythm of a heartbeat.
— Tagline
Advertisement:

Habfürdő (known as Foam Bath or Bubble Bath in English) is an obscure 1979note (Some sources, including IMDb, list it as 1980. The film was made in '79 but had a wide release only the following year.) animated musical Romantic Comedy made by Hungary's Pannonia Film Studio, the only feature-length film of artist György Kovásznai.

One day, the dull life of lonely medical student Anna Parádi is interrupted by Zsolt Mohai, a tall, dark and hysterical shop window decorator, who begs her to phone his fiancé Klára, and call off their impending wedding. Farcical melodrama, misunderstandings, musical numbers and overwrought dialogue follow, with recordings of real everyday parents fitted in, presented in some of the most Deranged Animation ever put out by its home studio. Topics include relationships, parenting, professional careers, the medical field, loyalty, commitment, compromise, and exploring the jaded outlook on life in 1970s Budapest.

Beyond the catchy tunes and social themes, the film is mostly known for its unconventional art design, taking Off-Model animation to the extreme, expressing all of the characters' mood swings in visual form, and even throwing in some Medium Blending. The characters morph, contort, shrink, fall apart, and shift between a multitude of art styles, and the apartment around them is brought to life with a variety of visual effects. Kovásznai's work, having originated from a socialist country with strict censorship in tense political times, has long astonished a number of Western artists and critics with its experimental and satirical nature, and his usual trademarks shine through in the film.

The movie, though, is obscure for a reason. It bombed hard and sank into oblivion, and its director died a few years later, unable to realize any of his future film plans. Foam Bath's failure also meant the studio put a tighter leash on its creators — thankfully, a few standout artistic achievements did still come out, such as Son of the White Horse. It wasn't until the 90s and 2000s that Kovásznai's works were rediscovered and placed into proper historical context, and though the movie still hasn't quite become a Cult Classic, it is now more accessible and gaining newfound recognition. As a sign of its slow surge in popularity, the film was given a restored re-release in 2021.