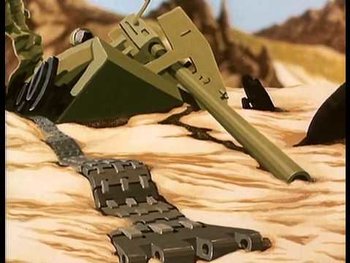 Firing Range (Russian: Полигон Polygon) is a 1977 short Soviet Science Fiction animated film by Anatoly Petrov. The plot is based on an anti-war short story by Sever Gansovsky. An inventor has made a tank that reads minds and can sense the fear and hostility someone in danger has- and only will fire if it senses it. He sells it to the generals that drafted his son into the war. The son died, and was awarded a posthumous medal. The inventor planned to let the machine kill the generals, as he knew they feared their own weapons. The inventor is happy to have his revenge, but that's never been what his son wanted. The machine turns on him when he realizes in fear that getting revenge is not what he should have done.

It won the Official Selection of Oberhausen, Germany in 1979 and the First Prize Yerevan, USSR in 1978. It remains a powerful anti-war statement and uses an impressive animation technique known as photographica, a highly realistic style before computers.

The full film can be found here