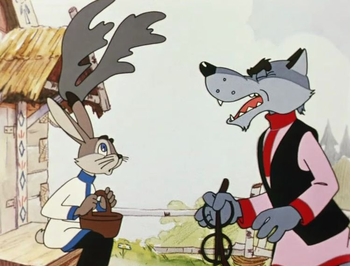 The story begins with Hare who sings that a good friend is one who does not lie and stays true to his actions. However, greedy Wolf comes and steals Badger's newly built house. He doesn't stop there as he lays claim to anything that he deems lost, even an apple that fell from a tree. Vixen, who herself takes something which does not belong to her, also becomes a victim of Wolf's lies. As revenge, she sends Hare to fetch the wolf to retrieve a lost item which the Hare is too honest to keep for himself. However, once the wolf sees what it is, a bear trap closes on his paw, causing him to rush through the forest, damaging the house he had taken away earlier from Badger. Badger removes the trap from Wolf, and in "gratitude", Wolf returns Badger's now destroyed house.