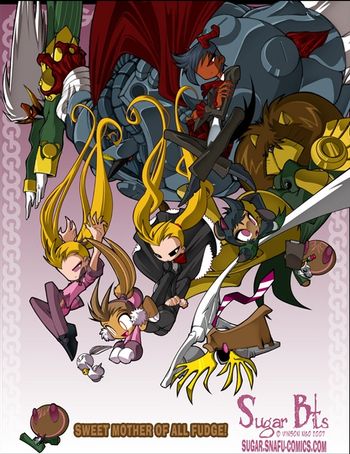 Run, run, run as fast as you can, can't catch me, I'm the gingerbread man!
Advertisement:

Somewhere in a world unseen by human eyes, lies a realm known as Harmonia. It is a place that represents the good things in life: Toys, Love, Sweets, you name it. That last one falls under the jurisdiction of the kingdom of Confectionaria, and it is they who make all things which tickle our sweet tooth. It is a delicious place, though not without danger: plaque monsters and the like invade the kingdom on a regular basis. Confectionaria is ruled over by as-of-yet king, along with his daughter, Princess Ginger. Lately, however, Ginger has not been herself, and this catches the attention of Hansel, the gingerbread captain of the royal guards, baked up by Ginger herself. One thing leads into another, and the two find themselves pulled into a bleak world with numerous dark forces gunning for them. And that's just the top of the cupcake.

The third Webcomic by Vinson Ngo a.k.a Bleedman (fourth if you count his one-shot for The King of Fighters) but, unlike Powerpuff Girls Doujinshi and Grim Tales from Down Below, this one is not a fanwork but an original creation of the author using fairy tales for the inspiration (i.e The Gingerbread Man among others). He announced the creation of Sugar Bits in 2007, uploading character designs till the comic eventually started over at Snafu-Comics

(by that point Bleed had moved all of his webcomics there, making this his only webcomic not started on DA.)

Like much of Bleedman's work, the comic tends to tread the line between cute and cuddly and nightmarish and grotesque. Though out of his three comics, Sugar Bits has the least amount of bloodshed and mature themes.