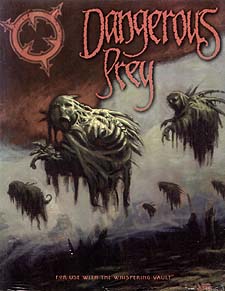 "Dangerous Prey", a compendium of Big Bads and other Big Creepy-Crawlies.
Advertisement:

The Whispering Vault is a tabletop RPG designed by Mike Nystul and published by Pariah Press and Ronin Publishing.

Player characters were once human, but no longer. They have become Stalkers, god-like beings serving the entities that rule our plane of existence. For these entities, referred to as Aesthetics, sometimes become so engrossed with the reality they have dreamed into existence, that they abandon their position and manifest into our world, causing mayhem and disaster as they do so. It is therefore the player characters' duty to neutralize such rogue demiurges (referred to as the Unbidden), and to lock them up in a transdimensional prison, from where their corrupting whispers can be heard across the planes—hence its name of Whispering Vault.