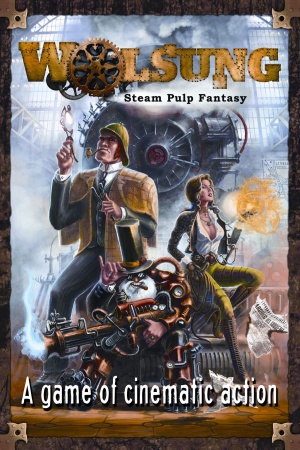 Read: "Lots of Stuff Blowing Up".
Wolsung: Steam Pulp Fantasy is a Steampunk Tabletop RPG, set in a fictional world of Urda, inhabited by the typical fantasy races. Since it's all about the Gentleman Adventurers of the Victorian period, most of the action takes place in Vanadia, the equivalent of Europe still trying to recover after the horrors of The Great War, when a group of Wotanian extremists led by the necromancer ven Rier attempted to take over the world. Apart from that, there's The League of Free Counties of Vinland, the wild and mysterious Lemuria, the even more mysterious Atlantis and the islands of Purgatory. Oh, and the Eastern land of Sunnir, home of the Orcs.
Advertisement:

Since we've mentioned steampunk and necromancers, another important element of the world of Wolsung is magic: conventional magic rituals, 19th century occultism and Magitek are canon forms of magic, along with some more exotic forms like works of art with magical properties (enchanted paintings, musical compositions as a form of spellcasting, etc.) or chaotic “wild talents”. Magitek even plays an important role in the world's technological advancement, with all sorts of devices being powered either by steam or mana batteries.

As of 2020, the system and setting are in the process of updating, aimed both at clarifying the rules and clearing up the elements of the setting that had not aged well.