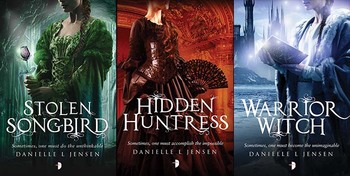 Cecile de Troyes is a daughter of a famous opera singer and a rich farmer. She grows up with her siblings, father and grandmother in a village of Goshawk Hollow. Since she has a great talent for music herself, at the age of 17 she is supposed to move to the capital Trianon, to live with her mother and become an opera star. However, on her 17th birthday she is kidnapped and taken to Trollus, a troll city under the mountain. There she is to marry troll prince Tristan, because according to a prophecy such union would break an ancient curse. As it turns out, 500 years earlier a witch cursed all trolls to become imprisoned under the Forsaken Mountain.Trollus is beautiful, rich and highly dangerous. And Cecile must learn really fast and lose her child-like innocence if she is to survive.

The series consists of three novels and two prequels: