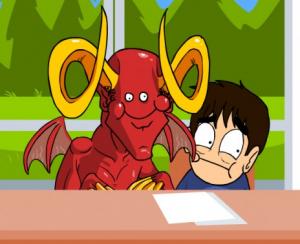 A rather unlikely friendship.
Satan: Put your socks on, Leo! We're goin' out!
Advertisement:

Leo and Satan is an animated comedy created by Newgrounds user Oney (Chris O'Neill), featuring the exploits of Leo, a preteen boy with a trapdoor to hell in his bedroom, and Satan, who's exactly who you'd expect him to be, although for the dark lord, he's pretty chipper and childish (but also quite bipolar).

", is a simple introduction to Leo's love of pancakes and Satan's love of sugar. Nothing special.

" is considered the first full episode, in which Leo's struggling with his math homework. Satan tries to help out, with disastrous results.

" is an overall improvement on length, animation quality and humour, as the pair discover to their horror that they're out of sugar. Whilst walking through town, they bump into a shady man who has what they need...

", has the couple borrow a board game from the neighbor's trash, which turns out to be a Ouija board.

" has the duo trying to find the batteries for their game controller.

" It's Leo's birthday, and that means it's time to start going to school.

The series is without a doubt the most popular work of Chris's, so popular in fact that a few attempts were made to get the series pitched as a series on Adult Swim. However, those attempts fell through when Chris learned he may lose creative control of his creation if he did. The series has also been on Hiatus for quite a while, though Chris has said that he is not done making episodes.

However, in July of 2014, Chris announced on Facebook that the series was permanently cancelled

after he and Sean Kiely, the series co-creator and voice of many characters, including Satan, decided to mutually sever contact with each other, citing Creative Differences. Chris also felt that he had completely lost interest in the series and its content. He has also stated that he felt especially soured on the series after being ripped off by a certain famous animation studio after he commissioned them to produce an episode for about $6000. Despite being promised otherwise, the end result took far longer to produce than what was expected, and was of a much lower quality than Chris could produce himself. Chris initially refused to pay due to the broken promises, but he was still forced to pay the studio under threat of legal action with their "Hollywood lawyers".

This web cartoon provides examples of: