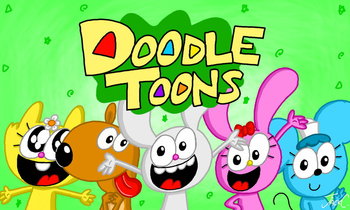 Doodle Toons was an animated web series created by the popular Irish YouTuber cartoonlover98, a.k.a. Jack.

The series follows in the footsteps of various cartoons of the 50's and 60's, with its cartoon violence, humor, and other aspects which are taken from such cartoons.

The five main characters of the series are:

It should be noted that new episodes of the series were released in slow intervals, due to how hard it is to make the episodes.

On June 13th, 2018, Jack officially stated the webtoon has ended

, although he continues to use the Doodle Toons characters in comics he posts to Twitter and DeviantArt. The animatic for the unfinished last episode of the show, "Monkey Business", was released a few days after this announcement, on June 17th, 2018.