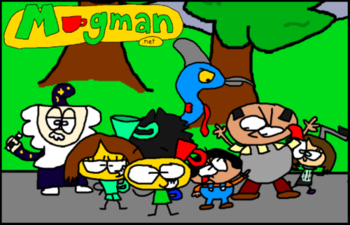 It's me, Mugman!note From left to right: Free Wizard, Teanna, Mugman, Johnny, Papa and Pementa. Behind: Sunshine..
Advertisement:

Mugman was the first major web series created by Jacob Lenard. The series focused around the bizarre and/or mundane adventures of Mugman... and that's about it. It was originally animated using Paint.net and Adobe Premiere but from "Mugman's Trampoline" onwards, it switched to Flash. It premiered on October 29, 2014, over a year after the original pilot.

Following a long period of Creator Backlash, the series ended on November 4, 2017 with "Farewell!". The character of Mugman would return in "Welcome to Wedgewood", but that series would also abruptly reach its end after only one episode, with Mugman being retired for good not long afterwards.

Not to be confused with the second playable character of Cuphead.