"Roger, if that game isn't finished by next week, you're fired! FIRED!"
—Gary, "Crunch" 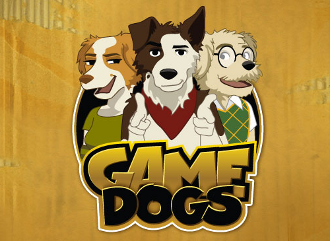 Game Dogs is a series created by Russ Pitts (who runs The Escapist, responsible for hosting Zero Punctuation), which centers around... canine video game programmers. Currently in its second season. Season one primarily consisted of main cast Chet, Bethany and Roger in their ventures in developing the game Satan's Retrievers for the business software company Electro Software, whilst their boss Gary attempts to find legitimate reasons to fire them. The second season has something to do with the Russians and a doggy equivalent of the Vietnam war.

Supposedly takes place in or around 80's or early 90's; however, recent developments seem to lean it a bit more towards Present-Day Past, what with the references to things like E3, Justin Bieber and the Blackberry smartphone.