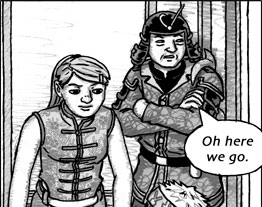 Matilda and the Genie
A Mad Tea-Party by Jonathon Dalton

is the story of Connie and Matilda, two girls whose parents are genetically engineered super-soldiers (in retirement). As soon as they leave their isolated community, they are faced with groups of revolutionary teenagers who hate them, an alien assassin, and the political fallout from a war between Earth and giant alien robots. Also there is tea.