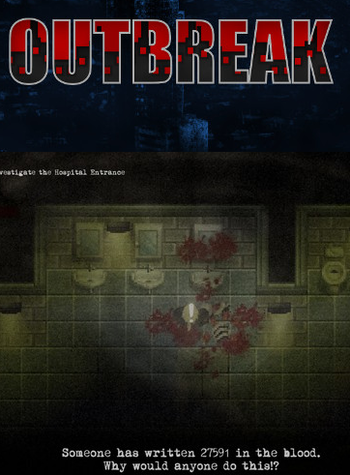 The Outbreak series is a series of low-budget indie Survival Horror games by Dead Drop Studios LLC (a single-person operation) heavily inspired by the Resident Evil series and made on the Unity engine. The series is available on Steam, the Playstation store and on Nintendo Switch.
Advertisement:

The first game, Outbreak, is a 2D Top-Down View game taking place in an abandoned hospital during a city-wide zombie outbreak. Either alone or in up to 4-player co-op, players take control of one of four survivors and must explore the hospital for a means to escape while dealing with the zombies within. It was released on Steam on June 17th, 2017.

The second game, Outbreak: The New Nightmare, is a 3D third-person perspective game with fixed camera angles but a floating tracking camera (similar to Resident Evil – Code: Veronica). Following a new group of survivors, the game takes place in various locations around the zombie-infested city. Players select which of several levels they wish to play, and play through to gain experience to upgrade their character. It was released on January 5th, 2018

The third game, Outbreak: The Nightmare Chronicles, is more single-player focused than the previous games. It has fixed static camera angles and takes place in a series of seperate independent rooms (similar to the early Resident Evil games), unlike the 2nd game where each location was a single continuous map. Players take the role of Lydia, an off-duty cop and one of the survivors from the second game, who finds herself seperated from her group and taking shelter in an old mansion in the countryside, which seems to have ties to the origins of the outbreak. It was released on April 2nd, 2018.

The fourth game, Outbreak: Lost Hope, changes from the fixed camera third-person perspective of the previous two games to a more modern over-the-shoulder camera. Players take the role of Gwen, a mother searching for her missing daughter Hope after a car crash in the zombie-infested countryside. It was released on April 22nd, 2019.

The fifth game, Outbreak: Epidemic (originally titled Outbreak: Pandemic until real life events made a change of title seem prudent), continues with the previous game's over-the-shoulder camera gameplay, while returning to the mission-based co-op gameplay of the second game. It follows a 3rd new group of survivors: Gwen (from Lost Hope), Tom, Kara, and Renault. It came out on Early Access on July 9th, 2019, and saw a full release on February 11, 2020.

The sixth game, Outbreak: Endless Nightmares is set immediately after the events of The Nightmare Chronicles, and follows Lydia and her 5 companions from the 2nd game who seem to have found themselves trapped in some sort of spacetime anomaly or Dying Dream. The game features rogue-like/rogue-lite elements, with players operating out of a hub area to explore procedurally generated areas. It can be played with classic fixed camera angles, over-the-shoulder third-person camera, or in first person mode. It was released May 19th, 2021.

The series has no relation to the 1995 film of the same name.

The Outbreak series contains examples of: