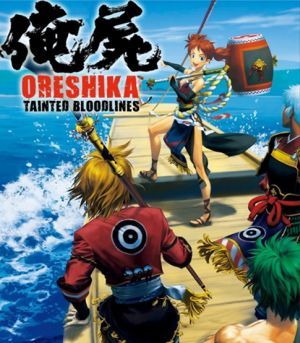 Oreshika: Tainted Bloodlines is an Eastern RPG for the Play Station Vita developed by Alfa System, and released in the U.S. and Europe on March 2015.
Advertisement:

The game starts in 12th century Japan, where a number of sacred artifacts have been stolen, and a certain sorcerer convinced the emperor that the only way to appease the gods was to put the clan responsible for guarding the artifacts to death. Namely, your clan.

Of course, the gods call shenanigans on this and resurrect your clan. The problem is that your clan was not only put to death, but they were also cursed twofold: not only will the resurrected clan live out their entire lifespan in two years, but they can no longer reproduce with mortals.

Thus, the game is a combination family management simulation and dungeon crawler, where you must go out and slay demons to earn enough devotion to convince the gods to produce offspring with your clan members.

Your ultimate goal is to defeat the sorcerer responsible for your clan's execution and lift the curses he has put upon you.