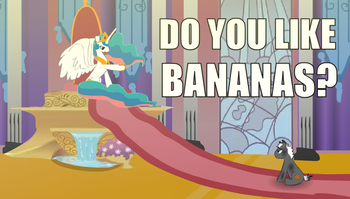 A My Little Pony Friendship Is Magic Fan Film created and uploaded to Deviant Art, YouTube, and Newgrounds by user "Skaijo". It's become pretty well-known among the original show's fandom for its humorously over-the-top portrayal of Princess Celestia as an obnoxious, careless dictator who responds to pretty much any request (or any interaction whatsoever) with banishment to the moon, via a cannon hidden in her floor.

Watch it on deviantART

. There is now a sequel, Friendship is STILL Magic, which can be seen on deviantART