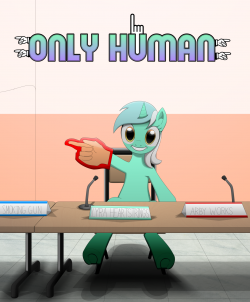 Just after she ends her art and design career, Lyra comes across with one of the biggest ideas for a show ever made:A cartoon show about six friends who unite their forces to defeat a Sealed Evil in a Can, and become close together, learning lessons about friendship.

Unfortunately, no channel wants to have that show in its schedule, mocking on Lyra and her show without even giving it a chance. The reason?

The main cast isn't formed by ponies. Or any known species of that world.

, which takes a joke from the fandom and transforms it into a surprisingly well constructed dramedy about the dreams of a cartoonist, and how difficult it is to fulfil them. With the help of Bon Bon, her executive producer, Lyra will get a chance to bring her show to life through The Pub, the most famous children's network in Equestria. There, she will need to fight against those who don't want "Only Human" to get on air, and fight against, well, Executive Meddling. At the same time, she will fight for her dream, for these invented creatures called "Humans", and for her wish to bring hope to the citizens of Equestria with her show.

Only Human contains examples of: