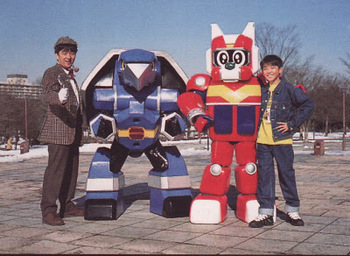 A boy and his robot detective dog.
Tetsuwan Tantei Robotack is the seventeenth Metal Heroes series, and also the last. It aired from 1998-1999.
Advertisement:

There are mystical items called Landtool that the ruler of Harappa Land, a land of robots, has instructed his people to find. Two of them, Robotack and Kamerock arrive in Yumegaoka and make friends with detective Kaoru Sugi and his nephew Kakeru. The two join Sugi's agency in their quest to find the Landtool and also solve crimes in their small town. At the same time, they must thwart the Gold Platinum P.D. Agency, headed by Robotack's brother and arch-enemy Torabolt, from finding and profiteering from the Landtool.