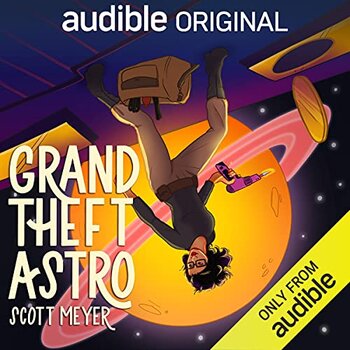 Grand Theft Astro is a 2021 sci-fi novel by Scott Meyer. It's described on the author's website as an "outer space caper".
Advertisement:

Brangelina Baird is a Classy Cat-Burglar living in the Colonized Solar System sometime in the future. She's renowned across the system as a thief but no one has ever been able to make any charges stick (and any attempts at falsifying evidence invariably led to the case being dismissed due to her lawyers). She's recruited by a clandestine agency known as the Toolbox (whose agents and handlers use tool-related codenames). Her trial mission seems to go successfully, but she finds out that a rival agent managed to infect her with a deadly virus that will kill her in seven days unless a cure is found. The Toolbox has her placed in cryogenic suspension to slow down the disease's progression. However, as the efforts to find the cure keep stalling, they have to keep bringing her out in order to steal more items for them with the hope that they will help the research.

The novel has examples of the following tropes: