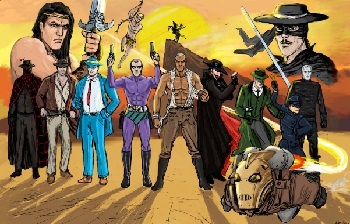 From left to right. Foreground: The Rocketeer. Middleground: The Spider, Indiana Jones, The Spirit, The Phantom, Doc Savage, The Shadow, The Green Hornet, Kato, and The Avenger. Background: Conan the Barbarian, Tarzan, The Lone Ranger, and Zorro. And that's not an exhaustive list of all the player characters available ingame!
This mod is a love letter to the classic pulp heroes of yesteryear. It tells an original tale of danger and daring do, teaming many classic pulp heroes and several modern characters cut from the same cloth. It features a huge cast of characters, including most of the pulp heroes of enduring fame. You can play as all of your favorite characters from the old magazines, radio shows, or serials, the characters that sparked America's heroic imagination. The story features several classic pulp villains and a twisting, turning plot that ties in to the settings and adventures of many of the starring characters. So, what are you waiting for? Come, ride with Britt Reid, laugh with the Shadow, swing the trees with Tarzan, and buckle your share of swashes with Zorro!
— Official description of the mod

and initially released in September 2016. The explicit premise of the mod is to pay homage to pulps.

Like the original game, the mod's gameplay consists in doing missions and punching bad guys while controlling a four-men squad selected from a large cast of characters. Available party members are mostly classic heroes from Pulp Magazines and comic strips of the same era. Also, while roughly half of them are protagonists fully involved in the plot, the other half is made of characters that must be bought with Prestige Points.

Set in The '30s, the story begins with seemingly unrelated events in various American places (a theft attempt in a museum, an investigation about random kidnappings, a massive escape from an asylum devoted to brainwash criminals into model citizens), who turns to be part of a single villainous plot. That's the start of an adventures with lot of action set on four countries (USA, Congo, Germany, and North Pole).

For more information and a download link, see Moddb

For tropes related to the gameplay which are unchanged from the unmodded game, refer to the Freedom Force page.