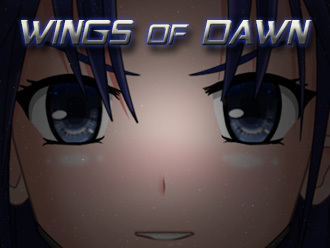 A Game Mod for the FreeSpace series, Wings Of Dawn has a completely new setting and story, rather than being an addition to the existing canon. Boasting a heavily anime-influenced plot, a metric ton of Shout Outs, and Lampshade Hangings galore, it is also notable in that it was completed by just one guy, known as Spoon.

The year is NC 0145note somewhere around AD 2375. The war between the Terrans and the Cyrva ended 62 years ago, and the two species are on friendly terms, though not integrated. In an effort to improve interspecies relations, a joint military academy is founded in the Abyss system, where cadets of both species would study alongside each other, and form the mixed-species Joint Guardian Angels Strike Force upon graduating. Now, the first class of the academy is graduating, and Misuzu Stella, Crystal Is'va Dertanya, and their classmates are looking forward to some routine peace-time assignments on board their new command ship, the LSF Guardian Angel. However, they soon find themselves fighting on the front lines against a sudden invasion by not one but several alien species.

Two additional mini-campaigns were released: "A Nordera Day", which allows you the challenge of playing as a Nordera warrior, and "Stranded", which is a side-story focusing on two pilots who get trapped behind enemy lines and must fight their way back home.

Following the success of the mod, Spoon decided to make the game a standalone title utilizing the Freespace engine, and began a massive overhaul of the setting. The new iteration of Wings of Dawn (christened "NuWOD" by Spoon) contains a rewritten story now taking place during the Terran-Cyrvan War, a new control scheme, and short VN segments between missions to add to the character development and worldbuilding. It is released episodically.

The remake includes examples of:

The original mod includes examples of: