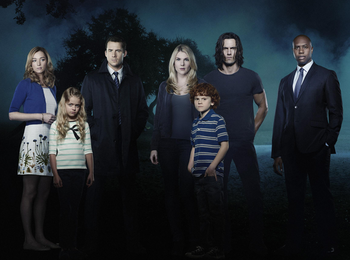 The Whispers is a series on ABC that focuses on an entity named "Drill", who is pretending to be an Imaginary Friend to kids in Washington, D.C., manipulating them into murder and other dangerous acts, all in the guise of a "game", while agents of the FBI and DoD try to figure out what's really going on.

Based on the short story "Zero Hour" by Ray Bradbury, in which Drill is an extraterrestrial manipulating Earth's children in preparation for an invasion of Earth.

It was canceled on October 19, 2015, ending the series with a cliffhanger.